This is a great interview with mike pond smith while he was in Poland with CD Projekt Red. There were some good Tips talks about creating the world of his board game or any kind of fictional world.

Cyberpunk how to build the world?

Inspiration: Start with research he subscribes to various tech journals and medical how to utilize it. He has a research on staff to do research. Subscriptions to Janes weekly. Look at stuff that is applicable for your project.

How Cyberpunk RPG game differs in the genre.

Most Cyberpunk stories when you lose its the end. That will not work in a game as no one wants to lose immediately. The tech in the genre is not an enveryday thing but in Mikes Cyberpunk its an everyday thing like how you just change your cell phone.

Little Heroes for themselves

The hero is about you not necesarily saving the world. About little heroes for yourself but a competent person in a bad world. Its about saving yourself. Most poeple don’t think about large concepts like joining capitalism. Most people go through normal days in cyberpunk it could be getting ready by loading your cyberware and guns and getting it ready.

Think about the world the character inhabits not just aesthetics.

When designing the world you need to ask about the way the world works for your story and game.

The later part of the interview talks about more of his influences, like Appleseed Ghost in the Shell and his tip to Poland. He also intends to include characters that have prosthetic but enhanced by cybernetics. 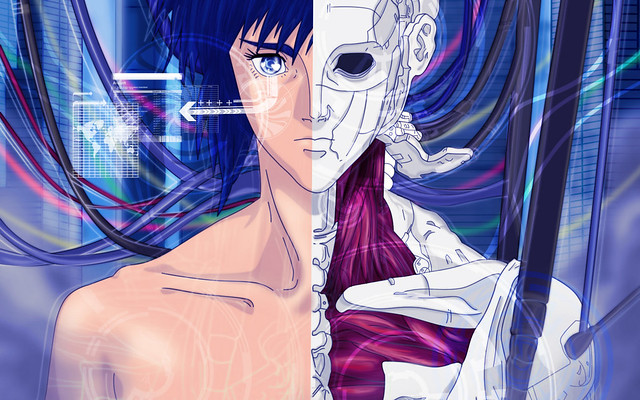 I like how he described the way the Networks in Cyberpunk and users called Netrunners used them. One thing he eliminated from his world history is the idea wwebpages were created an instead you kind of jack into the matrix. Its 3D interfaces come alive. It was developed for milatary use since back in the 80s people had to lug big monitors and so instead of a powerglove we have a neural interface where you immerse yourself ina 3d world of the Internet. Kind of like how VR is going now.

One thing is some things don’t change like needles will still be used for medicine, people will still use a pump action chemical gun to shoot and cars will be around. the only thing different in your fictional world will be what is the shape for that individual world.

Cyberpunk has been a niche sub genre of Sci-Fi but it recently has had a resurgance. My first inroduction was back in 1998 watching Ghost in the Shell and then later the Matrix. and a little game called Shadowrun which was cyberpunk but inflused with fantasy character like Orcs and Elves. I like this genre and it was really science fiction back then but technology is catching up

The game is available for preorder on Amazon here for PC, XBOX and PS4.